A young girl by name Idongesit Martins has taken to Facebook to share her clear intentions, saying that, after her West African Examination Council Exams (WAEC), she wishes to get married and that a husband is better than a degree.

In her words; I wish to get married immediately after my WAEC, a husband is better than a degree. 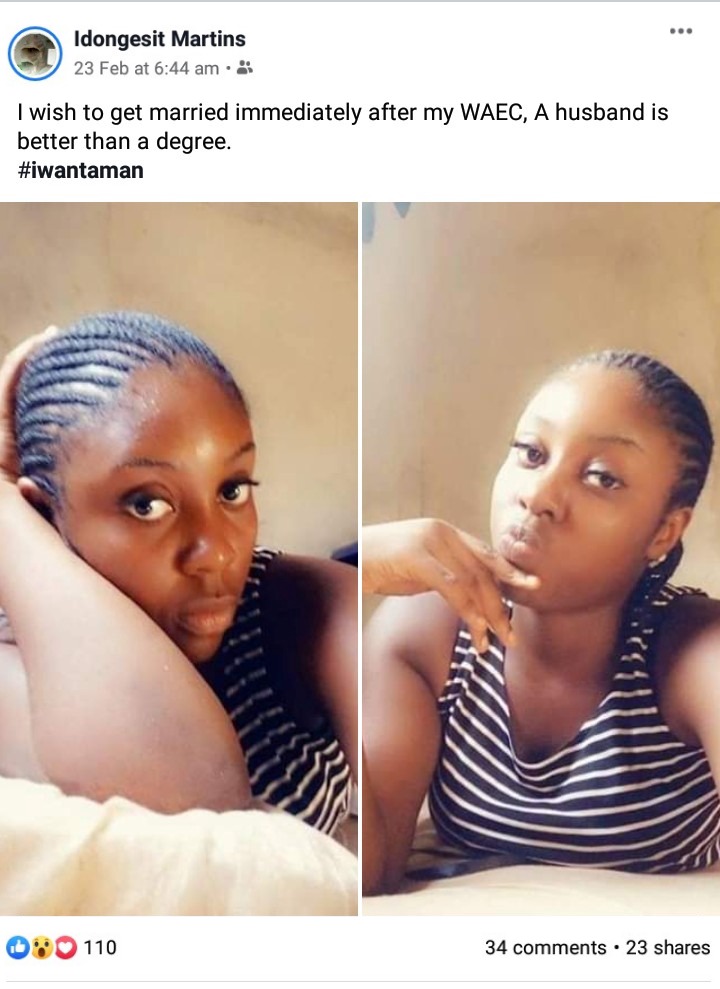 What do you think about this?

A man whose name is Abubakar Sadiq Kurbe, has shared what he noticed after visiting the Late Chief of Staff’s grave, Abba Kyari to offer him prayers. In his tweet on Twitter, he made it known that be drove to Gudu cemetery yesterday where the late Abba Kyari is resting to offer him a prayer. […]

A 70-year-old small-scale tea farmer from Getarwet Sub-location in Bureti constituency, Kericho County, Kenya is fighting for his life at Litein Mission Hospital after severing his manhood. Getarwet Sub-Location Assistant Chief Sylvester Sigei, who confirmed the incident on Monday, October 26, said the old man took a kitchen knife and mutilated his manhood after his […]

I earn over N400,000 doing body massage but my wife wants me to quit – Man cries out (Read full screenshots)

Another trending gist is set before us as a Facebook user with the name Akomolafe Samuel took to the social network, seeking for people’s advice and opinions on a story his friend told him. The man shared his conversation with a friend who is in serious marital problems with his wife, who wants him to […]

57 Replies to “I wish to get married immediately after my WAEC, a husband is better than a degree – 16-year-old girl”